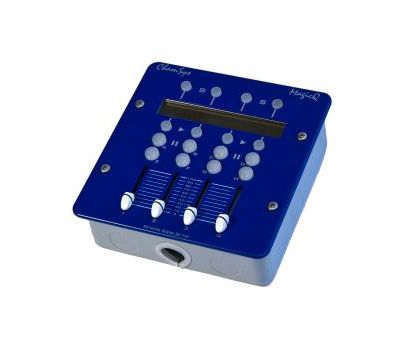 The MagicQ Wall Mount Scene Setter enables control of MagicQ from a remote location using a fixed network connection. The Scene Setter has 4 playback faders and 12 playback buttons, and can be mapped to the wing playbacks on a MagicQ system. An LCD screen shows the legends for the playbacks.

The MagicQ Wall Mount Scene Setter can be powered from the SnakeSys R4 which features a 3 port POE Switch, thus avoiding the need to run separate power cables.  The scene setter can also be powered from any 48v PoE capable network switch that provides power on the unused Cat 5 pairs.  If not used with a PoE switch, a Power over Ethernet injector will be required to power the unit.

Note on PC systems MagicQ must be running out of 'demo mode' for the device to work, the system needs either a Rack Mount Dongle, Wing interface or SnakeSys network device connected to unlock MagicQ from 'demo mode'

The MagicQ Scene setters fit into a 6/8 Gang back box. (1 supplied with unit)